Editor’s note: This article is also available in Portuguese and Romanian.

International Men’s and Women’s days involve numerous objectives, with both days highlighting issues considered unique to men or women. The following highlights two central narratives of IWD and IMD respectively; women’s supposed fight against oppression, and men’s attempts to promote positive recognition of men and boys in a misandric society.

Several popular myths concerning the origins of International Women’s Day exist, and after a survey of the literature it seems the variety of accounts have created confusion for commentators. For example, a widely bruited falsehood about IWD which surfaced in French Communist circles claimed women from clothing and textile factories had staged a protest on 8 March 1857 in New York City. This story alleged that garment workers protested against very poor working conditions and low wages and were attacked and dispersed by police. It was claimed that this event led to a rally in commemoration of its fiftieth anniversary (in 1907), with this commemorative gathering constituting the very first IWD. In response to these legendary claims Temma Kaplan explains that “Neither event seems to have taken place, but many Europeans think March 8, 1907 inaugurated International Women’s Day.”1

This fantasy of origins clearly attempts to position International Woman’s Day in a narrative of woman-as-victim, but it goes further. Speculating about the origins of the 1857 legend Liliane Kandel and Françoise Picq suggested it was likely that some felt it opportune to detach International Women’s Day from its true basis in Soviet history and ascribe to it a more ‘international’ origin which could be painted as more ancient than Bolshevism and more spontaneous than a decision of Congress or the initiative of those women affiliated to The Party.2

Whilst numerous apocryphal stories of this nature exist, we can safely say that International Women’s Day was first initiated by German socialist Clara Zetkin in 1910 as a way to promote socialist political objectives and was always referred to by the political name ‘International Working Women’s Day’. Observation of the event was primarily restricted to the Soviet bloc. It wasn’t until the 1970s when women outside of the Soviet bloc looked to celebrating the event that the word ‘working’ was increasingly omitted along with much of it’s socialist meaning.

Beginning in the 1970’s IWD became subject to a feminist revision. Whereas IWWD was previously used to highlight working women’s oppression by a bourgeois and powerful upper class of both men and women, 1970s feminists revisioned the basis of the day by stating that it was now men alone, as a class of “chauvinists,” who wielded all power over all women who had each become victims of men’s domination. It was men’s oppressive rule which IWD must now focus on overthrowing.

A decisive moment of the feminist revision came from the United Nations which officially endorsed and promoted the event from the late 1970s. Along with this endorsement the UN worked very hard to get rid of IWDs socialist traits, a move which was not accepted by many socialist women’s groups. For instance, in 1980 in Sweden, the socialist women’s ‘Grupp 8’ rejected working with other women’s organizations to promote IWD because it wanted to maintain the socialist origins and aims of the event: “We have now conducted a number of discussions within our organization and come to the conclusion that, as representatives of the socialist women’s movement, we cannot take part in a joint-party March 8 demonstration. After all, from the historical perspective, March 8 is the ‘International Socialist Working Women’s Day’ and our organization feels that this should absolutely remain the case. Changing this would be like changing May 1. For this reason we are unable to endorse the UNs appeal.”3 The revisioned event was seen by many as a betrayal of both it’s history and fundamental goals.

With this new ideological turn women were no longer viewed as part of the privileged upper class, and those former oppressors of women- i.e. capitalism; traditional gender schemas imposed by powerful men and women; various laws, language and so on- were reduced to one all-encompassing enemy: males and their patriarchal belief system. The new ideological basis for IWD was elaborated in the late 1970s-80s under the label “patriarchy theory”4 and it’s arrival correlated with a sharp increase in the numbers of women observing IWD,5 an interest generated by heightened concerns or fears over ‘patriarchal oppression’ of women.

It’s true that women have sought to dismantle restrictive gender stereotypes, but IWD appears more concerned with perpetuating those gender stereotypes rather than dismantling them. In light of the oversimplified explanations proposed by feminist ‘patriarchy theory’6 one hopes that whatever issues remain for women that they be explored in more sophisticated and nuanced ways to give International Women’s Day a more credible platform for promoting gender equality and improving gender relations.

International Men’s Day, as conceived by Dr. Jerome Teelucksingh in 1999, has a completely different ideological basis to both the early and later phases of International Women’s Day. Although the objectives of IMD occasionally intersect with those of IWD, such as advocating equality between the sexes, it is primarily concerned with celebrating positive portrayals of men and other issues unique to men’s and boys experiences. This approach is deemed necessary in a social context which is often fascinated with images of males behaving badly, eg. media portrayals of males as stupid, emotionless, greedy, violent, dangerous, power-hungry, selfish, irresponsible and so on. Such negative male stereotypes are frequently promoted in an attempt to shame males into behaving more positively, ignoring the fact that the negative behaviours do not apply to the vast majority of men and boys, or that such negativity may detrimentally impact the self-image and self-esteem of boys, which in turn impacts their willingness to engage in intimate relationships and in communities. In highlighting positive images of men IMD attempts to show that males of all ages respond more energetically to positive portrayals than they do to negative stereotyping.

In summary, International Women’s Day started as a day for women to promote socialist objectives, especially for proletarian women to fight against oppression by the powerful upper classes comprised of men and women both. In the 1970’s it became a new movement claiming that men alone oppressed women, and that IWD will be used as a vehicle to highlight, primarily, the results of an assumed gender war. Said differently the focus of IWD shifted from a class war, to a gender war.

International Men’s Day is not based on the assumption of a gender war. IMD is primarily about celebrating positive images of men as an alternative to negative male stereotyping, the aim being to inspire a new generation of men and boys to develop self-worth and a desire to participate in a society that will (hopefully) one day be free from misandry. 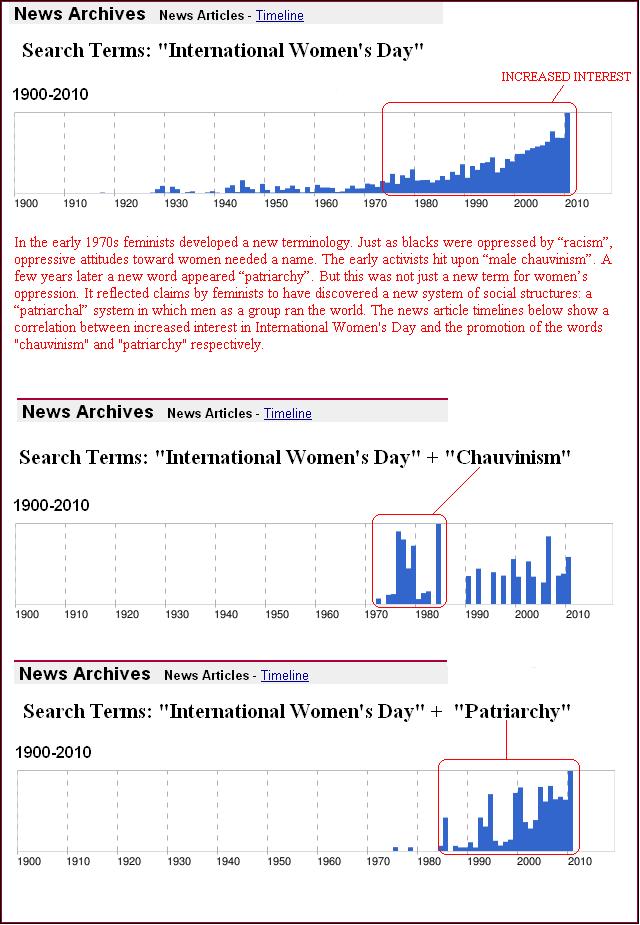